Like with all domesticated animals, there are plenty of options to pick from when you set out to purchase a queen bee. In part, this is because breeders have come up with several different strains.

On top of this, some native honey bee species are particularly attractive to those growing their own hives. For instance, so-called stingless bees from Central America tend to fetch a high price because their queens aren’t as finicky as some other breeds.

Table of Contents show
So how much does a queen bee cost?
How Do You Get a Queen Bee?
How Much Does a Beehive Cost?
Is Beekeeping an Expensive Hobby?
How Long Does a Queen Bee Last For?
Related Posts:

So how much does a queen bee cost?

Queen bees are generally around $70-100 regardless of breed. Some can go for much more on the open market, especially if they belong to one of these strains.

At times, you’ll see someone who unfortunately can’t keep his or her hive anymore so they’ll liquidate everything. You might be able to get a whole hive in one go, including a productive queen bee, this way.

Otherwise, though, you’ll want to start shopping around through more conventional distribution networks.

How Do You Get a Queen Bee?

At one point, the only way to reliably get queen bees was to go through a traditional printed mail order catalog. The process was really annoying, so I’m glad that several online distributors sell queen bees at decent prices.

Those who are lucky enough to live near fully-stocked farm supply places may be able to place an order for a queen bee through a clerk at the store. This is actually a better idea than buying one online because there’s more of a guarantee that you’ll get what you’re asking for.

In either case, those $70-100 price tags normally won’t be much different. Unfortunately, big stocked farming supply warehouses have largely been bought by hardware and tractor chains, so it’s getting harder to find places like this even for those who live in counties where everyone owns a few acres on average.

If you have to go with an online distributor, then make sure you pay close attention to the shipping details. Since queen bees are live animals, even if they are small ones, you’ll have to have them shipped a certain way.

Those in certain stages of life have to be cautiously transported. Don’t go with some shipping methods that are going to put your bee in any sort of danger.

On the other hand, make sure that you’re not getting taken. Some less reputable online bee dealers will take advantage of the fact that shipping is usually relatively high on bees so that they can soak a few more bucks out of you.

How Much Does a Beehive Cost?

It all depends on how you’re building it. I’ve seen some really impressive builds that must cost thousands, but there’s no reason that you have to go with anything this elaborate.

Honestly, I was originally discouraged when I first started because I didn’t think that I’d ever been able to afford anything that was anywhere near as good! One big lesson I needed to learn was that I didn’t need to.

Depending on the living structure you’re putting together, you can get a whole hive in place for around $200. Around half of this is going to be the queen, which shows just how pricey they can really be!

The materials and any other organisms that you need to start a hive aren’t going to cost anywhere near as much as this crucial little critter.

Do you enjoy do-it-yourself kind of projects? If so, then you could save even more by building most of the hive out of frame parts from a hardware or garden store.

Some of the beekeeping kits they sell are really nice looking and come with both the hive and all the tools. We recommend this starter kit off Amazon (shown below). 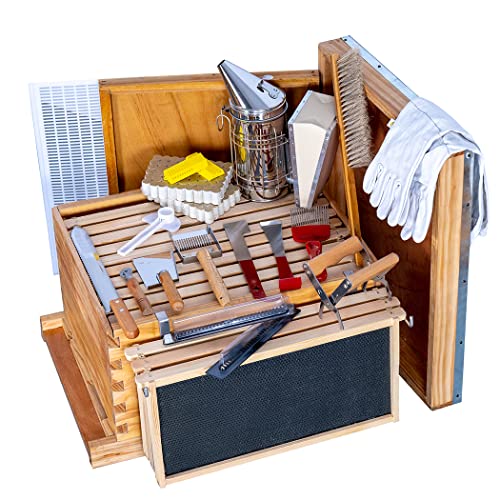 Is Beekeeping an Expensive Hobby?

You could say that beekeeping is as expensive as you want it to be! Some people throw a ton of money at it even though they don’t really have to, but you could say that about nearly any hobby.

With around $200-300 and a little time, you could set up a fairly sophisticated beehive. You might even be able to save a little more if you make the general frame yourself.

Beekeeping uniforms and a few other accouterments might bring your costs up to around $500, but once you have everything you won’t have to spend anything else for quite some time. That might actually make it less expensive than keeping some types of pets.

You won’t be spending all of this money all at once either.

How Long Does a Queen Bee Last For?

While it depends on how well you treat your colony of bees, I certainly hope you do treat them well! Assuming that you do a really good job, then a single queen can lay up to 20,000 eggs a day for two or three years.

In that time, she could potentially produce over 1 million offspring. There are plenty of factors that impact these figures, but you might be surprised to find out just how long one could last.

Once this time passes, your queen bee might go into a dormant state before unfortunately passing away of old age. That being said, there’s a chance that your colony could produce a new queen by feeding a female bee what’s known as royal jelly.

Not every colony becomes fully self-sufficient like this, but there’s a chance that if you care for it that it might be. Once that happens, you might be able to keep it for years because after this first cycle the risk of a complete collapse of the colony goes down dramatically.

Each new queen should last around the same period of time, though natural-born queens inside of a colony could last around 6 months to a year more than those you order. After all, the bees inside of the colony are related to her so they’re not as likely to reject her as others that might have shown up when you first started.